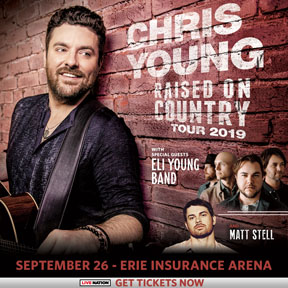 After launching his USAA sponsored “Raised On Country World Tour 2019” in May, multi-platinum entertainer Chris Young has already played to capacity crowds over the first 12 shows of his headlining tour. And the massive momentum continues as he announces another nineteen shows to round out his record-setting year. With over 25 dates for the first leg of shows going through September 14, Chris Young’s “Raised On Country World Tour 2019” will resume September 26 in Erie, PA through November 23, wrapping his 2019 45+ city tour at Lexington’s Rupp Arena. He’ll be joined by special guest Eli Young Band as direct support along with Matt Stell for the fall run beginning September 26.

2019 has been a banner year for Chris – “Raised On Country,” his current single and the namesake for his 2019 tour, is at #7 (Billboard/Mediabase) and rising. He’s crossed the 2 Billion streams mark for his music, including newly-released songs “Drowning” and “Town Ain’t Big Enough,” featuring Lauren Alaina, from his upcoming 8th studio album. And he recently set a personal milestone with the biggest crowd of his career — over 21,500 in attendance — for his recent headlining show at Philadelphia’s BB&T Pavilion.

Chris will also extend his partnership with USAA into the fall, and together they will continue to offer discount tickets to current military members and veterans as a thank you for their service. More details can be found at usaa.chrisyoungcountry.com.

In addition, Chris Young VIP packages will be available for the “Raised On Country World Tour 2019.” Find a complete listing of tour dates, including additional Chris Young concert stops for 2019, VIP package details and purchase tickets at ChrisYoungCountry.com.