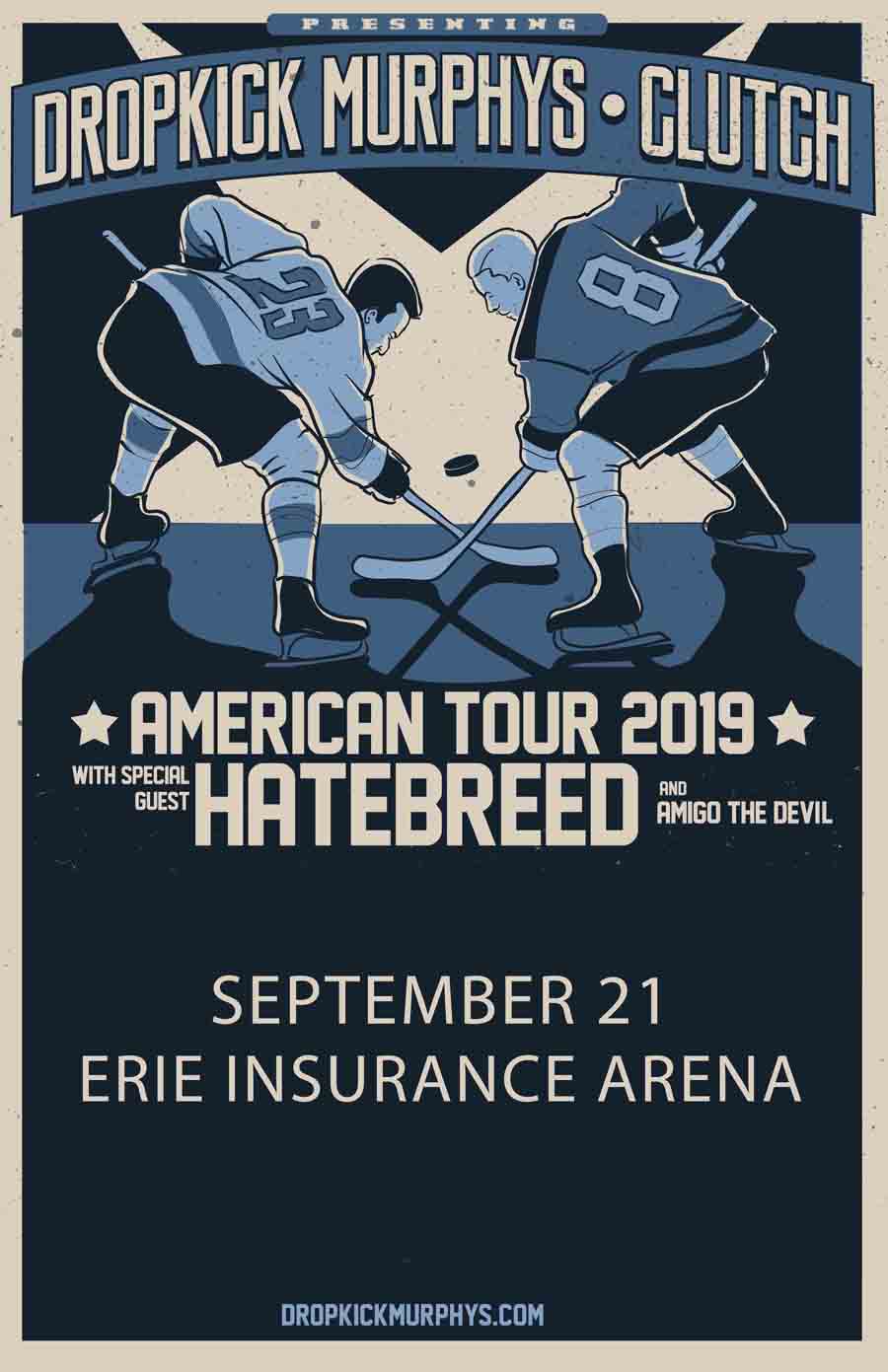 Dropkick Murphys will kick off fall 2019 with a coast-to-coast tour featuring Clutch, launching September 20 at the Mass Mutual Center in Springfield, MA. Joined by Hatebreed on most dates, plus special guests Amigo The Devil and Russ Rankin of Good Riddance on select dates, the tour wraps October 14 at the WAMU Theatre in Seattle, WA. Tickets for most dates go on sale Thursday, April 18.

Since forming in 1996, Boston's Dropkick Murphys have sold a staggering 7 million albums worldwide, with 2005's The Warrior's Code achieving an RIAA Gold certification and its smash single "I'm Shipping Up To Boston" nearing double platinum and appearing during a key moment of Martin Scorsese's Academy Award-winning The Departed. They've hosted sold out concerts at most of the city's landmarks, including Fenway Park, TD Garden, the Boston Pops, and even the last voyage of the USS Constitution.

Dropkick Murphys are touring in support of their11 Short Stories Of Pain & Gloryalbum, released through the band's own Born & Bred Records in 2017. The album debuted at #8 on the Billboard Top 200 and was the #1 independently released album. There's a feeling of purpose throughout the album, influenced by the band's work with The Claddagh Fund, a charity the band established in 2009 to help support addiction recovery as well as children's and veterans' organizations.

Maryland rockers Clutch have been pushing the boundaries of heavy rock music since the 4 original members got together in high school. Having been tagged hard rock, blues rock, southern stoner rock and alternative metal by media and fans across the world it is safe to say one thing..."What you see is what you get" and what you get is a musical force that has been best described as the quintessential American Rock Band.  Clutch quickly became known for their relentless touring schedules, playing shows from whiskey stained 2 door venues in the hills of West Virginia to the iconic Brixton Academy in the UK, and are currently touring in support of their 12th album Book Of Bad Decisions.

Unstoppable, Grammy-nominated hardcore juggernaut Hatebreed remain one of the most relevant and impactful acts in the hard rock and metal scenes. Since their definitive debut in 1997, they've continued to be road warriors, touring constantly and sharing stages with everyone from Slipknot to Slayer, while also serving as one of the top-tier headliners on multiple festivals including Ozzfest, Mayhem, Warped Tour, and countless others. The Connecticut band is currently celebrating 25 years of ruthless breakdowns, pit-stirring anthems, and poignant lyrics across eight albums and consistently sold-out shows in 2019.